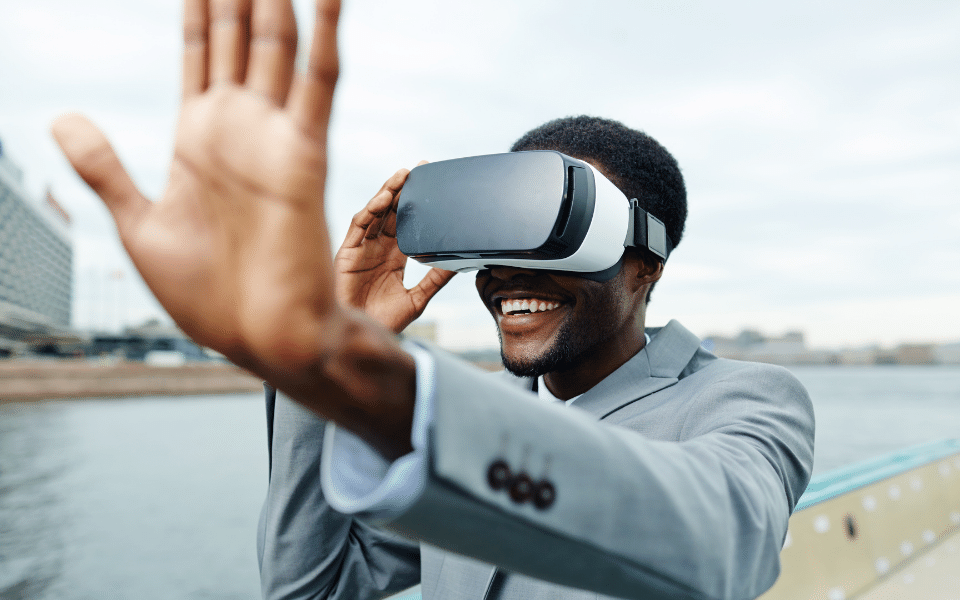 If you have ever created a virtual tour,

I bet the way you did it is — simply heading over to the property, taking out your camera, and starting the recording. Then you probably moved around the property until you’ve covered major areas.

Well, that’s a terrible way of creating a virtual tour.

While a few potential customers might be okay with such a poorly-created tour, it is very unprofessional not to know how the best agents do theirs. And for the sake of the companies and agents who can’t seem to create great tours.

I’ll be discussing how to do so in this content.

The process of creating an excellent tour is similar to the mediocre process I just mentioned above.

In short, this article isn’t providing a step-by-step set of instructions; it is rather providing tips.

Work with a plan

One of the biggest mistakes I’ve seen agents make when creating a virtual tour is — starting the tour without a plan.

When people are trying to do serious and complex things, they often have a plan. But why is it that people don’t always have a plan for something as serious and as complex as a virtual tour?

Well, this isn’t right. And the next time you’re creating a tour, having a plan is a thing you should take seriously.

Let’s assume I’m about to sell a 3-bedroom apartment to a potential customer, and the customer says, I will like to see what I’m buying, before proceeding with the payment. I’ll first sit down to ask myself questions like —

What are the key features to show them on the tour?

Where should I start the tour from?

What are all the important places that must appear in the video? And so on.

Based on the answers gathered during self intelligence thought I can decide that:

Okay, let me start the tour from the veranda.

Then after that, we’ll go into the living room.

I may even bring along a thermometer to show him that the living room always remains cool during the sunny seasons. And so on

If you sit down to plan a tour, before even starting it, the chances of creating a great tour will be pretty high. Because you took the time to sit down and think about the tour, you’re less likely to miss out on important things that will get the buyer very excited about the house

In the video, highlight the primary features and also the excellent features.

Another mistake many agents and companies make when creating a virtual tour is that they always fail to highlight the primary features and the nice features of the property.

So, before sending any tour video to a potential customer, you ought to do some video editing. Firstly, create an image like this — an image that highlights the primary and the nice (secondary) features of the property. 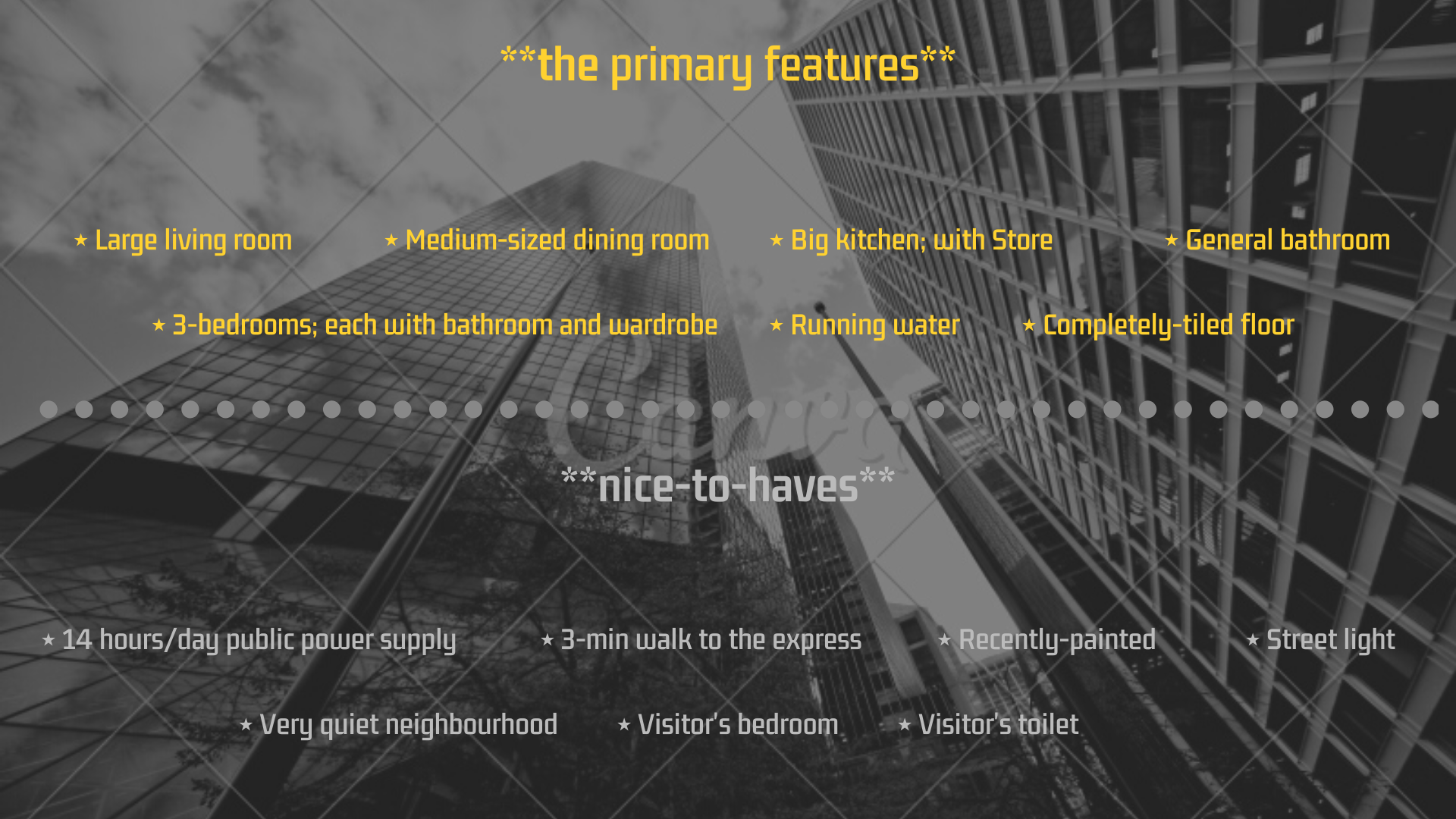 This kind of image can be created with a tool like Canva. For those who have never heard of Canva, consider taking some minutes to read an article I dedicated to the software.

After creating an image like the one above, use a video editor to make this image displayed for the first 20 seconds of the video.

There are many good video editors out there. Ordinarily, I should recommend you one. But because the editor which will be the most suitable for you, will also depend on some factors only you can tell, it won’t be best if I’m the one who makes the suggestion.

You should rather be the one to research the best video editors we have out there, then select based on what you find the most suitable.

I should also state that — it doesn’t really matter if you’re using an Android, iOS, Mac, Windows, or Linux, you will find a good video editor for your platform.

Focus on the primary features and also the nice features

Another mistake I’ve seen many agents and companies make is — creating a tour whose main focus isn’t the primary features and the nice features of the property. For instance, many agents and companies create videos talking about so many things, including relevant and irrelevant information. And at the end of the day, the potential customer gets overwhelmed with so much irrelevant info that they become unable to focus on the things that truly matter.

Rather than just featuring anything into the tour video, pick the primary features and the nice features (the primary ones first, then the secondary ones) one-after-the-other.

Then spend some minutes showing and discussing things about the current feature.

And everything you should mention during that session should be about the current feature.

When you feel you have said enough about the living room, you can then move on to another feature and discuss it in the same manner.

When you are done with all the primary features and all the nice features, you can then address those other things you’ll also like to mention. But make sure you don’t spend too much time discussing these additional things, to avoid taking away the viewer’s attention from what matters the most.

Indicate the beginning of every single feature

If you plan to create an excellent virtual tour, one of the mistakes you should also avoid is refusing to indicate the beginning of each feature of the property.

For instance, some agents will be discussing the living room then subtly transition to the rooms’ discussion, without the customer being aware of this transition. When the customer isn’t really aware of such a transition from one feature to another, it’s very easy for them to take little from everything you say.

When transitioning from one feature to another, always say things like “Now, let’s move on to the dining room”, etc.

And after making such a statement, remain silent for a few seconds before starting your discussion on the next feature.

This way, when your potential customer is done with the video, it will be much easier for them to navigate through everything you’ve said, in their head. They’ll also get to remember most of the things you say.

You should also note when creating your virtual tour is that — you should spend as much time as possible on the primary features and the nice features of your property.

Some agents are fond of rushing things.

Treat each part until you are sure you’ve addressed everything the customer will like to know. Don’t worry about the video being too long, as creating a short video that isn’t impressive doesn’t help anyone.

However, this isn’t to mean your video should be unnecessarily long.

That’s not what I’m saying. If there’s nothing much to show or discuss about a feature, then it’s not compulsory to spend much time on it.

Ensure the visual is of very high quality

Do you realize that people don’t always buy based on logic alone? When people buy things, emotions are often involved. In other words, if you understand how to stir up people’s emotions, you increase your chances of closing your real estate deals.

One of the reasons why we’ll often prefer a Samsung over a Tecno is because of design.

Even though the Tecno may have the same hardware as a Samsung, people often prefer buying the more expensive Samsung, all because the Samsung phone is more appealing. Similarly, if you can create a virtual tour that excellently shows the beauty of a property, you can make the potential customer get attracted to the property and end up buying it, without the property being the best deal they can get.

And when it comes to creating tours that will excellently capture the beauty of a property, one of the things you have to ensure is — the video quality of the tour has to be of pretty high quality. And to create a high-quality video, one of the things needed is a good camera. By “camera”, I’m not necessarily saying you have to get a standalone camera.

You can actually use the camera on your phone.

But when using a phone to take the video, ensure that whatever phone you use has a great camera. 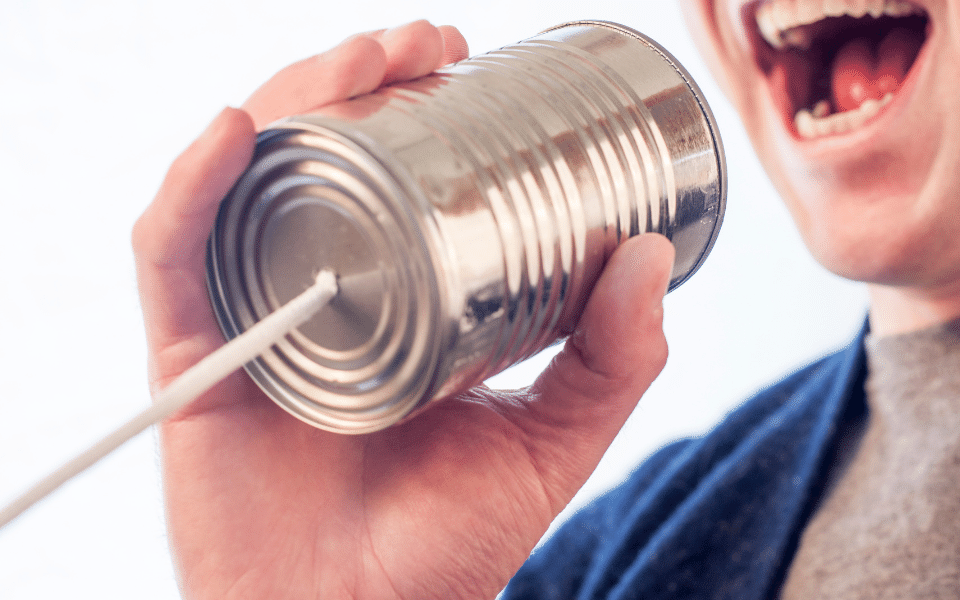 To create an excellent virtual tour, one of the things you also have to ensure is that you talk slowly during the recording of the video.

A virtual tour is a thing meant to give a potential customer a feel of the property, without being physically present. In other words, this is not a thing that should ever be rushed. But when you talk fast, you’re subconsciously rushing your customer, which can leave the customer displeased.

In short, when creating your virtual tour, talk slowly.

It will also be a nice idea to pause from time-to-time to give the potential customer enough time to process things.

When creating a video for a virtual tour, there may be noise in the background.

For instance, the video may capture the sound of a car passing by or the noise of a mother shouting at her son; this kind of thing shouldn’t be present in a good virtual tour. So after creating your video, if you notice some background noise, use a video editor to remove the background noise.

There are many editors which support this feature, so finding a suitable one should be no problem.

Earlier on, I stated that people do not only buy things based on logic, emotions also often play a big part. And another way to leverage this fact is by adding a piece of cool background music to the tour.

Don’t get this wrong.

When I say add background music, I’m not asking you to add a piece of hip-hop music or a religious song as the background music. Here, the songs I’m talking about are those composed of only musical instruments.

If you’ve used a lot of ATMs, you should have an idea of what I’m talking about.

Find a piece of good music with Google

For those who don’t know where to find this kind of music, you can use Google to find a song suitable as background music. And after finding a suitable song, use a video editor to add the song as a background song.

Please, don’t make the mistake of thinking you can play the song in the background while taking the actual recording. If you add the background music this way, it’s almost certain you’ll end up with a terrible video.

Rather use a video editor, as suggested.

It’s also important to warn that the volume of the background video shouldn’t be too high. The volume of the music should be adjusted in such a way that it doesn’t overpower your own voice. But when everything is quiet, the viewer should be able to hear it.

If you use all the tips I’ve discussed above, I’m confident you’ll come out with something significantly better.

However, even though the 9 tips provided should be enough, there are definitely still more tips that can possibly improve the quality of a virtual tour. So do not limit yourself to just the tips above.

You can also take some time to think about other ways creatively to improve the quality of your tour further.

To buy a belonging and Hire OR Buy and Sell?
5 Things You Want from Your Real Estate App Developer
Don't Rent a House in Lagos without Knowing [ These 5 Things ]
Online Real Estate Marketing For Real Estate Brokers: Four Genuine Reasons That will Change Your Min...