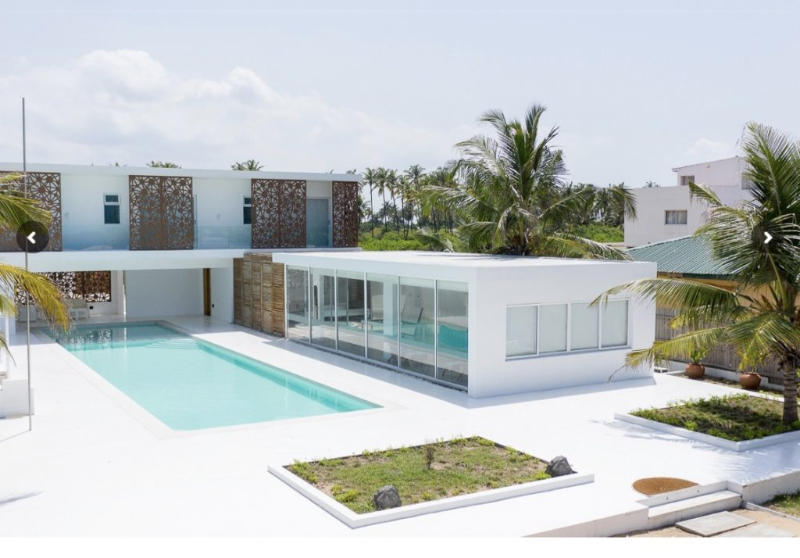 But not only that, the house is also the only one I will tag “excellent”, among all the top beach houses on the beach.

Providing an elaboration, Sencillo is the only Ilashe house where nothing ever goes wrong — there’s never something like, “water outage was experienced“, “the bedsheets were dirty”; “the pool didn’t seem well-maintained”; etc.

In fact, if you’ve been to the other popular beach houses in Lagos, you may be surprised to hear something as good as Sencillo exists in Lagos.

Also, when it comes to their level of professionalism, I can’t think of any other beach house in Lagos that comes close.

And not only are Sencillo’s staffs very polite and helpful, they are also always there (24/7) to respond to your needs.

Furthermore, I greatly appreciate the fact that Sencillo has a very good online presence, an aspect where many beach houses and resorts in Lagos lag behind.Also, of all the 33 different people I spoke with, as regards how they feel about Sencillo, not a single one of them gave a less than 5/5 rating.

In short, if you’ll like a highly pleasant experience at Ilashe, Sencillo is arguably the first place to go.

However, while every statement above is factual and devoid of an exaggeration, I’ll not like to inflate your expectations beyond normal; the place is nice, but not in terms of luxury.

In fact, the house is rather a minimalist house, but the management of the resort just seems to get minimalism and professionalism beyond the level of most beach houses in Lagos.

Also, I’ll like to add that, even though this content puts Sencillo is a very positive light, in no way is this content a sponsored one but strictly based on merit. 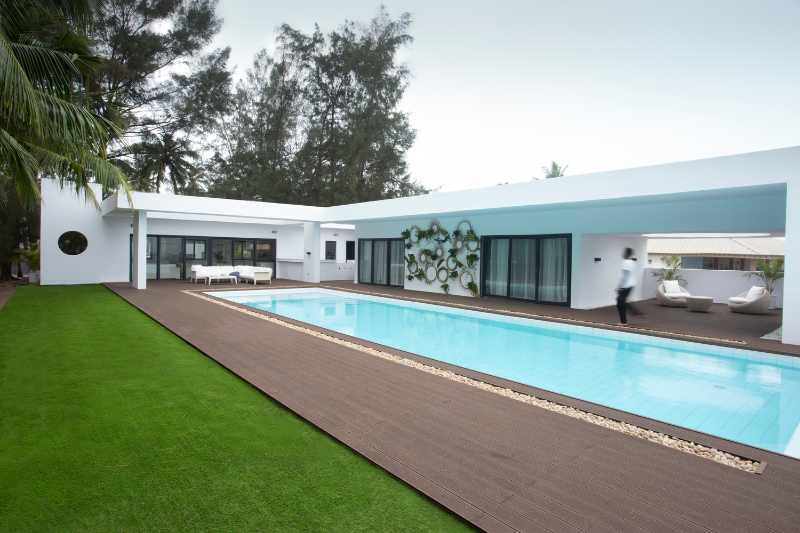 To help you understand what Sencillo is like and what to expect, I’ll be providing some information about the features of the resort.

And one of these features worthwhile mentioning is the kitchen.

Sencillo comes with a well-furnished kitchen.

It’s not the nicest kitchen in the world, but you’ll appreciate — the design, the items, the neatness, and the organization.

This kitchen is also the type where you’ll find everything you may ever need to prepare popular dishes in Nigeria.

In short, if you’ll like to prepare your meals yourself, for your visit to Sencillo, not only is it possible, I’m also sure you’ll find it enjoyable.

After getting a skin infection from swimming at the pool of a particular resort I won’t name, I’ve always been careful about what swimming pool I dive into.

But on seeing the pool at Sencillo and the way it is being used, I had no doubt the pool is safe to use. 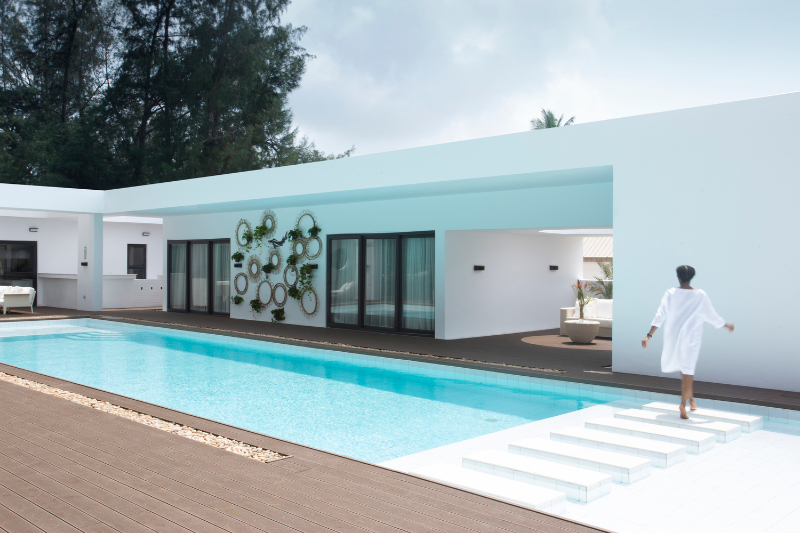 So I didn’t even have to think twice before jumping into it.

In other words, not only does this resort offer a pool, the pool is also very safe to swim in.

As regards the size, the pool isn’t the largest I have seen, but I believe it’s big enough, regardless of your standards.

A private lounge is also one of the features of Sencillo.

There’s nothing much to say about this, but I should mention that the lounge is nice, and you’ll love it.

While most ladies are not skilled when it comes to pole dancing, I know there are some few who are very skilled at it.

And if you’re one of such girls, you should know that pole dancing won’t be a problem at Sencillo.

The resort has dancing poles, so expect this place to be more fun for you, than most other places in Lagos. 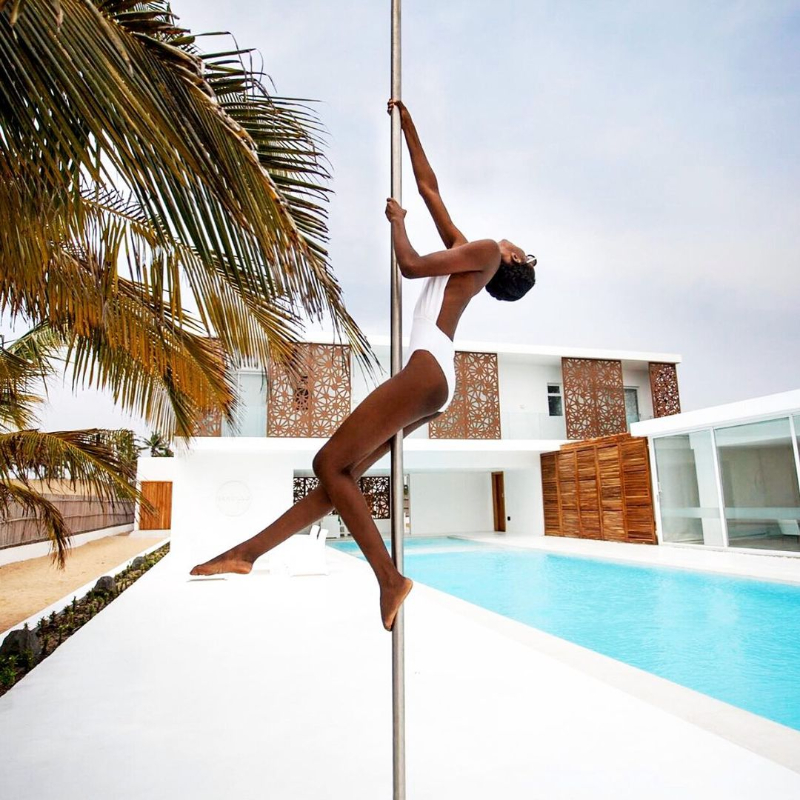 Table tennis is a game available at Sencillo.

There’s nothing special about the game, but I know some people will appreciate the availability, since not everyone is a fan of outdoor games.

The tennis table is standard, so expect to derive as much fun as you would, from playing on a good tennis table.

Almost everyone likes quad bikes, so I believe you will appreciate this.

However, note that, to use the quad bikes, you’ll have to pay some additional amount of money.

The quad bikes can be rented for hours or the whole day.

Barbecue (BBQ) is a thing a lot of people love.

And if you’ll like to prepare some during your time at Sencillo, this will be no problem.

There are BBQ grills at the resort, so all you have to do is to get the things needed and someone to do it for you.

And in case you have no one among you to do it, I think Sencillo has staffs who can help with this.

Snooker is also a game available at Sencillo.

There is this 7-foot billiards table available at the resort.

What is Sencillo ideal for?

“We believe you, Sencillo is great, but what types of event is the place ideal for?”, is something I often hear from people.

And if you also wonder the same, I’ll say, consider Sencillo if you’re a group of people (16 people and above), who wish to go catch some fun at a place devoid of the chaotic life common in Lagos. 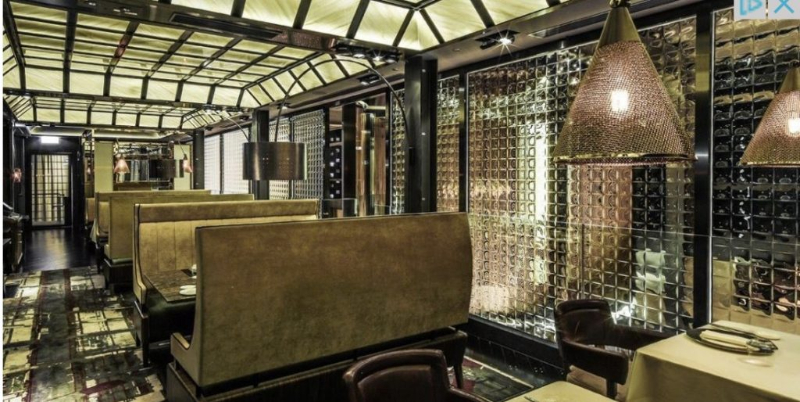 However, if you’re the type who wants to have a getaway with your partner, I don’t think Sencillo is a thoughtful place to come.

Not only may the expenses be too much, but also the place may end up too quiet for your liking, since renting Sencillo is an exclusive thing.

For those who don’t know what I mean by exclusive, when you rent Sencillo, you’ll own the place to yourself, for the duration of the rent; this means if it’s just two of you, then you should expect to see just the two of you and only staffs working at the place.

Also, if you’re a small family, Sencillo may not be a great place.

As for those who wonder whether Sencillo is a thoughtful place for marriages, the answer is “Yes”.

In fact, I consider it the best place for weddings on Ilashe Island.

I’ve been to Sencillo a countless number of times. And never have I seen a pet there.

However, at the same time, I’ve never heard there’s any policy against the presence of pets within the premises.

In short, if you’ll really like to bring along pets, you should reach out to them, and explicitly ask the question.

The cost of renting

To book Sencillo, you can either pay a visit to Sencillo or use the request form on the official website.

And when trying to book, it is often advised to do so at least 7 days before your desired date.

Also, you can send an email to bookings@sencillolagos.com.

If you have never been to Sencillo and can afford going there with some friends, I’ll ask you to really consider going there.

I’m very sure you won’t regret this.

Also, before wrapping up this content, I’ll like to add that Sencillo offers transportation from the Lekki Phase 1 jetty, down to the resort.

So if you’re not pleased with most of the jetty owners at the Lekki Phase 1 jetty, you can also consider paying Sencillo to handle your transportation, to and fro.